Thenzawl is a village on the border of India and Myanmar, located in the Indian state of Mizoram, tucked between Bangladesh and Myanmar.   Although it is officially in India the people are not Indian in appearance or language as you can see in the videos of the women weaving found on the textiles page.

We had the pleasure of visiting this village and purchased our cloth directly from the weavers.

This style of weaving is originally from further east.   The weaving looms were once backstrap looms seated on the ground.   They are now predominantly using stand-up looms with a ball bearing weight known as a fly-shuttle, so the process is faster.  They call these looms Indian looms as opposed to Burmese backstrap looms.  It is an interesting mix as the background of the cloth uses the fly-shuttle and the pattern is made by individually wrapping each thread.  In Indonesia the wrapping weave is referred to as Buna.

Originally the thread used would have been cotton but they are now using a cotton/acrylic mix which they believe is more durable and easier for them to come by.

The geometric patterns mixed with a vibrancy of colours make this textile truly amazing. 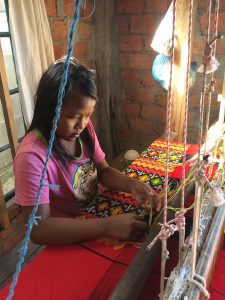 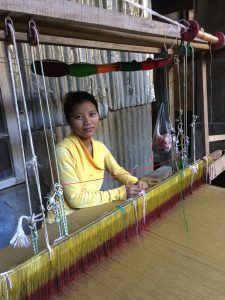 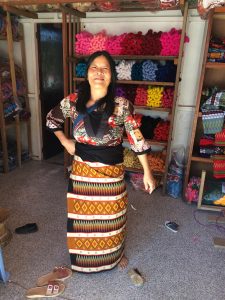 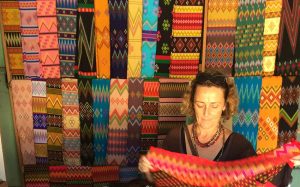