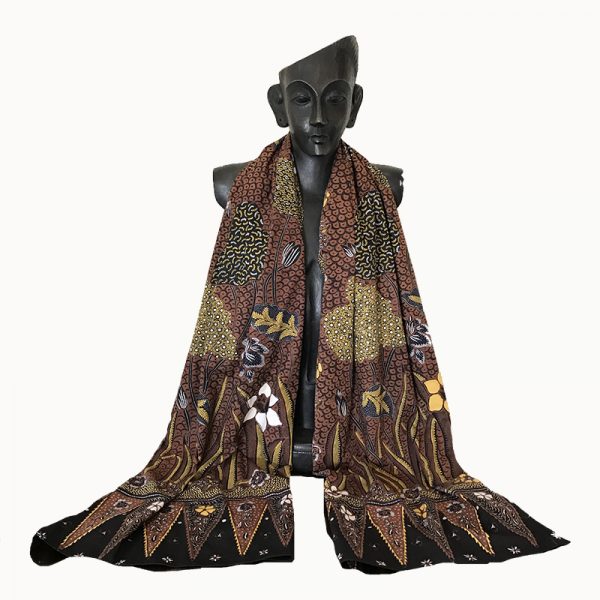 Magnificent batik tulis, drawn with wax and dyed multiple times to achieve such fine and vibrant designs.  Each scarf is one-off, designed and created in Pekalongan, Java.

Spectacular as a scarf, wall-hanging or runner.

Batik is both an art and a craft and has been practised for centuries. In Java, Indonesia batik is part of an ancient tradition and, still today, some of the finest batik cloth in the world is made there. The word batik originates from the Javanese tik and means to dot.

Earliest cloth believed to be batik was found in Egyptian pyramids.  We know batik was practised in China as early as the Sui Dynasty (AD 581-618) and the technique made its way to Indonesia where they developed it and made it part of their cultural practice.

To make batik selected areas of the cloth are blocked out by drawing (tulis), stamping (cap), screen printing or painting hot wax over them, and the cloth is then dyed. The parts covered in wax resist the dye and remain the original colour. This process of waxing and dyeing can be repeated numerous times depending on the complexity of the design.  Pieces can take a days or months to complete.

The traditional dyes used are indigo blues and soga browns and these are still the characteristic colours for work in central Java. Towards the end of the 19th century chemical dyes were introduced in the coastal regions through trade and as a result the colours from areas such as Cirebon and Pekalongan on the north coast are bright and more experimental than the traditional pieces produced in Yogyakarta and Solo.

The city of Pekalongan is on the north coast of Central Java. It is known as the “City of Batik” and has a long history of batik production. Due to to its historical trading patterns Pekalongan batik has been influenced by (and has influenced) other areas of Asia in their textile design. Pekalongan is quite contemporary in their creativity and their well established batik house produce some of the finest batik in Java.

Tulis is the premium style of batik where the entire design is applied by hand using a tool called a canting (pronounced chanting).  It is a pen-like instrument made from a small copper reservoir with a spout on a wooden handle. The reservoir holds the hot wax which flows through the spout.

The cloth is then dipped in dye or the colour is painted on.  After the cloth is dry the wax is removed by boiling the cloth. The areas treated with wax keep their original colour.  This process is repeated as many times depending how many colours are desired.  The process can take days or even weeks for more complex designs and colours.